Domaine Pierre-Olivier Bonhomme is the continuation and evolution of the now defunct Puzelat-Bonhomme négociant project. In the 1990’s, Clos du Tue-Boeuf was faced with many years of tiny crops caused by late frost, mildew, hail or general bad weather. Revenues were tight, and Thierry Puzelat, the younger of the two brothers running the estate, wanted to expand by renting or buying more vineyards. His brother Jean-Marie, in his late forties at the time, did not want to add more vineyard and cellar work to his already heavy schedule. So Thierry started a négociant business, set up a winery in the village of Monthou-sur-Bièvre and sourced excellent vineyards and vine-tenders to buy their grapes.

Thierry being a busy and ambitious man, he soon found himself opening a wine bar in Orléans and a wine import company (you have him him to thank for the scarcity of Mauro Vergano’s tasty elixirs!) The négoce project had gotten bigger than he’d anticipated and he needed a partner. Thierry quickly found one in Pierre-Olivier Bonhomme, a teenager who’d dropped out high school and had helped work a few seasons at Tue-Boeuf. Pierre-O, young and motivated, became a partner in his early 20’s and the négoce business was renamed Puzelat-Bonhomme.

In anticipation of Jean-Marie’s retirement from Clos du Tue-Boeuf, Thierry knew the day would come where he would have to re-shift his focus back to his family estate. A plan was then hatched to have Pierre-O continue the négociant operation under his own name. The switch officially happened with the 2013 vintage, but Pierre-O has vinified the entirety of the production since 2011.

Rather than start from scratch with new labels and cuvées, Pierre-O has continued making the wines that put Puzelat-Bonhomme on the map: Touraine Sauvignon, (now declassified as Vin de France), “La Tesnière” Blanc and Rouge, “In KO We Trust” and of course the infamous and ever-popular “Telquel”. Over the last few years, Pierre-O has also been able to purchase vines from which he produces, amongst others, an old vine Sauvignon and a red, declassified Cheverny called “Vercheny”. As of 2019, he owns 4.5 hectares and rents an additional 3.5, from which he mostly produces single varietal, single vineyard cuvées (“Sauvignon POB”, “Ormeau des Deux Croix”, “La Boissière”…)

In the cellar, Pierre-O learned everything from Thierry Puzelat and there are obvious parallels with the Tue-Boeuf wines. With the exception of some recently released macerated whites, almost all of the white wines are direct-pressed, then ferment and age in old barrels. The reds see a whole-cluster, semi-carbonic fermentation and then elevage in old barrel. Tiny amounts of S02 are only added at bottling and if deemed necessary, more often on the whites than the the reds. Even the the entry-level Telquel is usually bottled sans-souffre.

One month maceration in fiberglass and amphora. 25 mg per liter of sulfur added just before bottling. 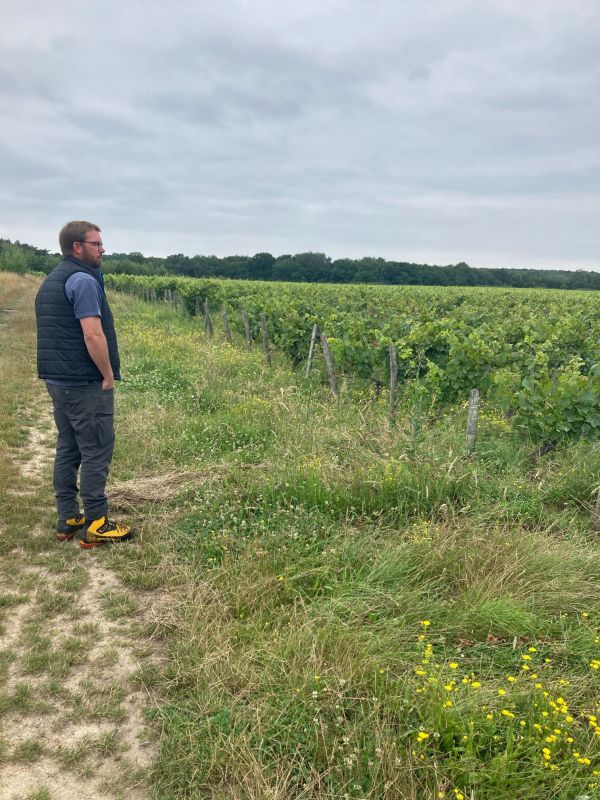