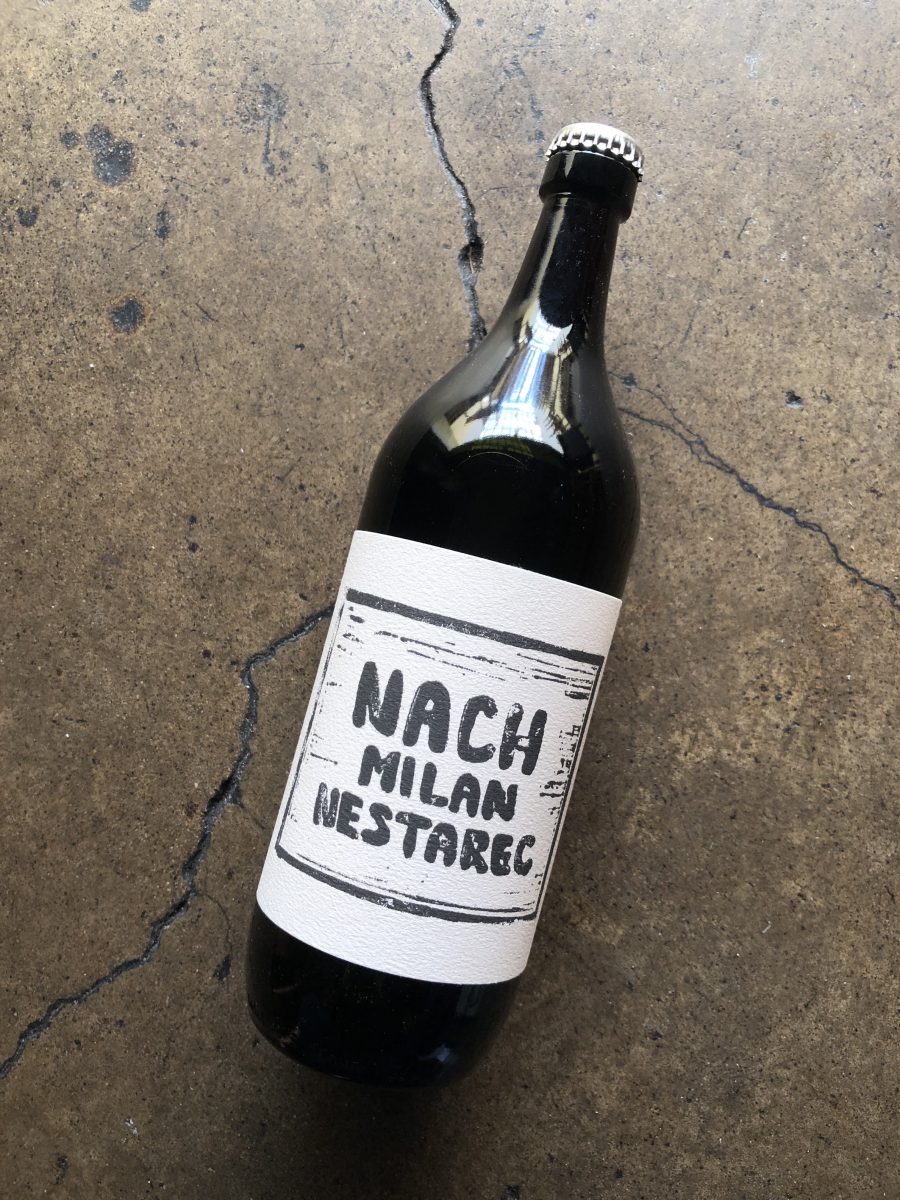 “Milan Nestarec is not a winery. Nestarec is ideas that just happen to be represented through wine,” reads one of the first lines on this Moravian prodigy’s captivating website. It is a fitting description: first, because the sheer diversity and dynamism of Nestarec cuvées reflect the centrifuge in his head (“my colleagues must sometimes hate me and my constant chorus of “can’t we do it better / differently?” he admits with a chuckle). Secondly, because there’s a gradual development of Nestarec wines towards more precision and “essence over style”, which absolutely reflects the winemaker’s personal journey – and it’s quite a fascinating story to follow. (And drink.)

It all started… uhm, that’s actually a good question – where is the starting line for someone born in the biggest wine-growing village in the Czech Republic, where virtually every family had a couple of vines planted somewhere and made wine for their own consumption? Although Milan’s father originally repaired roofs for a living, wine was always present in their daily lives – so much so that Milan never even considered another career, ever. The family journey towards professional winemaking started when he was little, after the Velvet revolution in 1989, when the Czech state returned to them a tiny plot previously confiscated by the communists (the socialist regime forbade virtually any private business after WWII, including farms), and Milan’s father started to season-work in a German vine nursery.

Since then, every spare penny the family earned went into getting new land and planting it, sometimes to Milan’s chagrin: “I remember being a 13-year-old kid who badly wanted a computer, like any teenage boy back then. But too bad for me, my father preferred to buy 0.6 hectares of land instead. Obviously, I couldn’t be more grateful for this choice now,” he gestures towards Slovenské, a 5-hectare vineyard that truly enabled them to go professional back in 2001. It still counts among their signature vineyards, giving birth to Nestarec’s ever-popular TRBLMKR or flamboyant UMAMI field blends.

Using the whole family’s labor (“I worked my ass off there as a kid, as we couldn’t afford to pay external helpers,” Milan recalls), know-how and second-hand equipment (“we didn’t have any money for new machines either”) from the German vine nursery, the winery started to produce bulk wine. Milan’s father passed the winemaking decisions to the teenage Milan shortly thereafter: “My classmates at the winemaking high school would boast ‘my dad is letting me make my own wine, I have a 30l demijohn of mine in the cellar now’ and I’d be like ‘oh shoot, my father just gave me 40,000 litres to play with’,” Nestarec Jr. recalls with laughter.

At that time, the winery was conventional both in the vineyards and in the cellar, although Milan jokes that “I couldn’t be technological even if I tried – I just couldn’t get it right, even when following the ‘recipes’”. Another important tributary in his turn towards “normal wine”, as he likes to call it, was spending his “pocket money on bottles like Leroy and Dagenneau with some of my classmates”, he insists as we raise eyebrows at the thought of 17-year old country boys ordering costly biodynamic wines for fun. After meeting a couple of natural OGs both in the Czech Republic and abroad, mainly during a short trip to the Collio / Goriška Brda region on the borders of Italy and Slovenia, the path was forged. 2009 was the first Nestarec vintage using spontaneous fermentation, aging on gross lees and only a little sulfur.

At the same time, an even more important switch happened in the vineyards when the Nestarecs eschewed chemicals and started to work organically. “Looking back, I see how essential this was, and how long the path is still ahead of us. Only now am I starting to see the little changes in the vineyards’ vitality, signs that we’re treating them well. But I also see all the mistakes we made along the way – and I’m very happy that we’re now in a place where I can afford to do things properly, and set a slightly different tone for the future, resulting in beautiful, wise old vines and nuanced wines coming from them. I’m shy of the term terroir, so I call it genius loci instead, but you get the idea,” Milan smiles.

This is exactly one of the compelling shifts we mentioned earlier – Nestarec’s passion for aged vines recently made him buy selected old vineyards or work with Simonit and Sirch, the top pruning consultants working around the globe with names like Gravner, Leroy or Angélus. And there’s also clear progress being made in the cellar: “When I started, I was mesmerized by heavily macerated wines, so much so that I’d make cuvées that spent months on skins. When I dropped the use of SO2 completely in 2014, this would sometimes result in wines you couldn’t even call orange – they were plain brown,” Milan bursts out with laughter.

“Then I had a short period I call “master brewer”: no additives, of course, but I toyed with different maceration times and techniques like carbonic for each blend. In retrospect, I probably wouldn’t change a thing – that’s who I was back then and I totally accept all this as part of my learning curve. But the older I get, the more I simply enjoy the expression of what’s locally unique, without too much orange coverage. Loess is more,” Milan grins, referring to the light eolic sediment soil that constitutes a big part of his vineyards and works well especially with his beloved Neuburger and Gruner Veltliner white grape varieties.

Besides this “coming of age” (despite having nearly 20 vintages under his belt, Nestarec is only in his early thirties as we speak) and the grounding influence of his wife Mirka, Milan’s important advisor and reality-check on all things wine and life, these changes have also been possible thanks to a new, bigger winery space they moved into a couple of years ago. Mockingly called “Chateau Nestarec”, the vast precinct on the outskirts of Velké Bílovice is a polar opposite to the romantic idea of a shining historical building surrounded by manicured vines.

Milan’s chateau looks quite industrial, courtesy of its past incarnations (auto repair shop, concrete plant or coffin factory to name just a few), but it finally allows him to work with more precision and peace of mind. “At one point in the past, we had wine in like seven different places, using literally every bit of space we could find around Bílovice and Moravský Žižkov. This crazy situation led to some fun accidents – we’d probably never have WTF if it wasn’t for the summer heat in my parents’ garage that triggered the flor essential for the wine’s character – but at the end of the day, it was an incredible relief and step up to be finally able to work in one proper, big space,” Nestarec explains.

The winery also features an incredible amount of fun vintage stuff, such as an old 1960s Czech Jawa motorcycle in his father’s man cave. “I love it for its authenticity and local pedigree – that’s always important to me,” Milan radiates – it’s true that all his wines sport a Moravian hybrid variety or a grape typical for Central Europe, such as Blaufrankisch, precisely for keeping the connection to the local roots. Not that you’ll find the name of the grapes on the labels, though: “I stopped doing that some time ago, as I want people to approach the wine without any preconceptions, to enjoy it (or not) because of its actual taste and character, not based on their idea of the given variety.”

Since the 2018 vintage, he’s barely made any single-varietal wines anyway, opting instead for blends and mainly field blends. “I find that it’s something typical from our past, and I like to revive such habits. Plus it goes well with my belief that the best creator of all is nature itself – if my aim is to express the unique soil-grape situation we have the luck to have on some of our sites, and there’s a beautiful old vineyard with multiple varieties that have grown together successfully for 40 years, why manipulate that in the cellar?” he shrugs. Nestarec top-shelf wines – iconic “White Label” cuvées like GinTonic, Podfuck or Juicy Fruit – are now made exactly like this, with grapes from a single plot (or two neighboring ones), that are just gently stomped and then left to ferment and rest in big old vats for more than two years to fully showcase the old vines mentioned earlier.

Milan’s more “everyday” wines from younger vines, such as the merry table companions Forks & Knives or the “Moravian realness” of Běl, Nach and Okr liters, enjoy similar treatment, only with shorter aging times. The new, truly generous winery space also meant that Milan could invest in equipment that allows for more precision during the making of all his wines, from a sorting table to a special peristaltic pump that moves the wine super-gently towards the bottling line, which is a crucial piece of the winemaking puzzle, according to Nestarec. “I’m geekily obsessed with bottling – it’s such a fragile phase, especially for a zero-sulfur wine, where you can either keep all the energy you managed to harness in the barrel or completely ruin it. I’ve learned that every detail counts.”

Judging from the quality of his wines and the beautiful acidic tension literally jumping from his bottles (one of Milan’s uber-popular pet-nats is fittingly called “Danger 380V”), he seems to have learned this well.

Milan on this wine: “This wine embodies my unassuming Moravian roots: the light-bodied, fun juicy reds with good acidity that are truly at home here. I grew up with them, so it was sad to see that the (vain) pursuit of hefty Cabs, fake tannins and new oak became fashionable in Moravia as well. Nach is my tribute to the real Moravian reds, wines with lot of fruit and little alcohol so that you can drink heaps of them every day.

Hence also the 1-liter bottle: I remember hearing the word “másnica” used for a bottle of wine when I was a kid. Only as an adult did I learn that it derives from the German Mass, an old volumetric unit roughly equalling 1 liter, which used to be a standard size of bottle for a guy working in the field (mixing it with water to get more quantity). I do love the term “minimagnum” too, though, courtesy of my Montréal friends.” The name Nach means purple in old formal Czech, another tribute to things past. Linocut label by Milan’s wife Mirka. 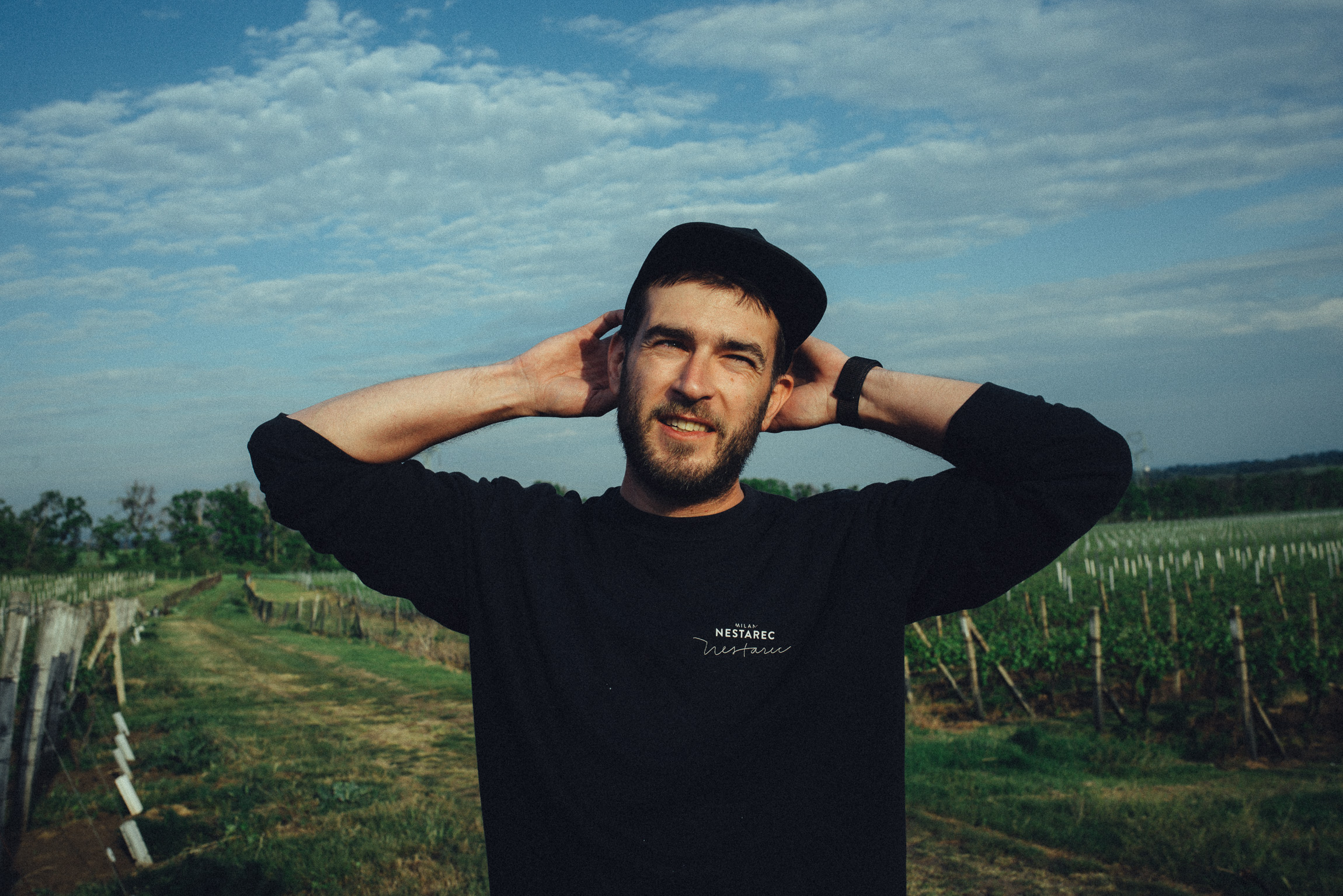